In spring and summer every year, stories about “hordes of spiders” and “flesh-eating venom” fill tabloids and social media.

This rhetoric greatly exaggerates the relative risk of Australian spiders, leading to excessive pesticide use and unnecessary phobias.

There are more than 49,000 species of spiders in the world and around 4,000 of these live in Australia, many with astounding behaviours, beautiful colours and natural, biological pest control potential. We should be celebrating the diversity of our spiders in Australia — and what better time than right now?

Many insects and spiders have been growing over the winter months to emerge once the weather gets warmer. This means you’re probably going to start noticing more spiders around your house and garden. So which ones should you worry about? 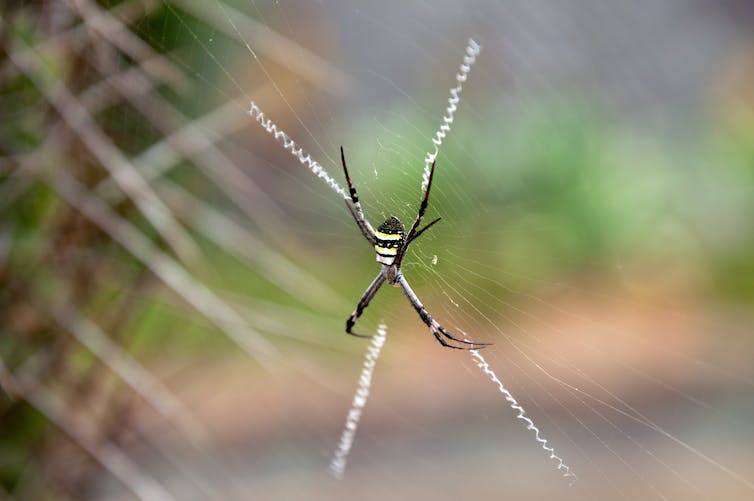 Some spiders like to live in houses. It’s cool, dry and there are hundreds of tasty insects to eat that you may not have even noticed, such as silverfish, book lice and springtails.

One of the most common spiders people find at home across Australia is, true to its name, the black house spider. These spiders build messy webs on fences and in the corners of windows.

Because they’re black, people can mistake these spiders for funnel-webs, but black house spiders are smaller and harmless. Also, a funnel-web will never make a web in your window.

Read more: I travelled Australia looking for peacock spiders, and collected 7 new species (and named one after the starry night sky)

In your garden you may spot webs with a white cross (from St Andrews cross spiders, Argiope keyserlingi), with leaf retreats (from leaf curling spiders, Phonognatha graeffei), or golden silk (from golden orb weaving spiders, Trichonephila sp.). While impressive, these spiders are shy and their venom is harmless.

Even larger are huntsman spiders (from the Sparassidae family). While they’re famously fast moving, their bites are rare and, at worst, cause mild to moderate pain.

The good news is the vast majority of Australian spiders are harmless. In fact, a global study found less than 0.5% of spiders are dangerous to humans.

However, Australia is home to a number of “medically significant” spiders whose bites can be severe. 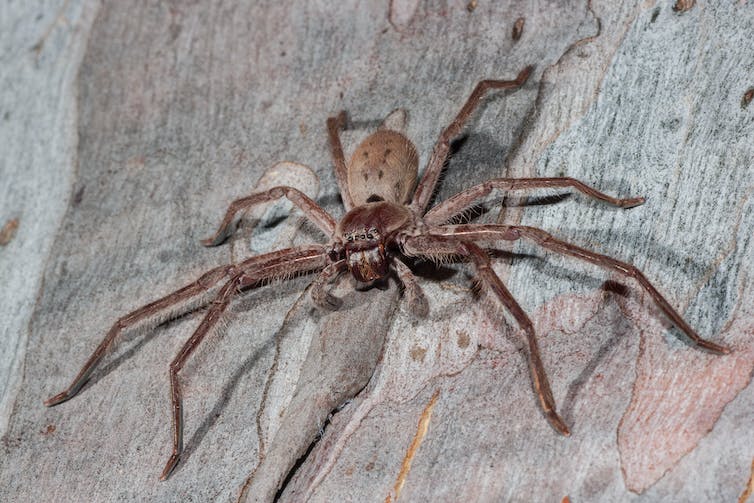 Funnel-webs are emerging from their burrows

Most funnel-webs will spend their lives hidden in their burrow. But during spring and summer, male spiders will wander about the bush (and sometimes back gardens) looking for mates, increasing the risk of human contact.

Recent studies into funnel-web venom evolution have shown male Sydney funnel-webs have a high concentration of a toxin called “delta-hexatoxin”, which disrupts neuronal signalling and can lead to respiratory and cardiac failure. This helps them catch insect prey and defend themselves by causing pain in predators.

But through a quirk of evolution, this toxin can be fatal to humans.

The hexatoxins are distributed throughout the funnel-web family. To date, serious bites have only been reported from funnel-webs in southern Queensland and NSW. This includes the Sydney, Blue Mountains, Toowoomba/Darling Downs and the Northern Tree-dwelling funnel-web spiders. 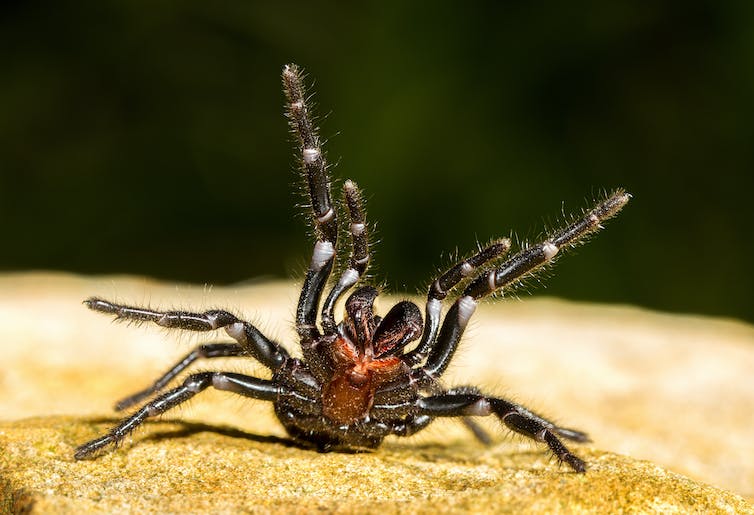 Funnel-web spiders spend most their lives hidden in a burrow. Shutterstock

Mouse spiders (Missulena sp.) also have a toxin similar to hexatoxin in their venom, so their bites have similar effects. Like the funnel-webs, there are species of mouse spiders all over Australia.

Fortunately, clinical studies suggest serious mouse spider bites are rare, but these spiders should still be treated with caution. 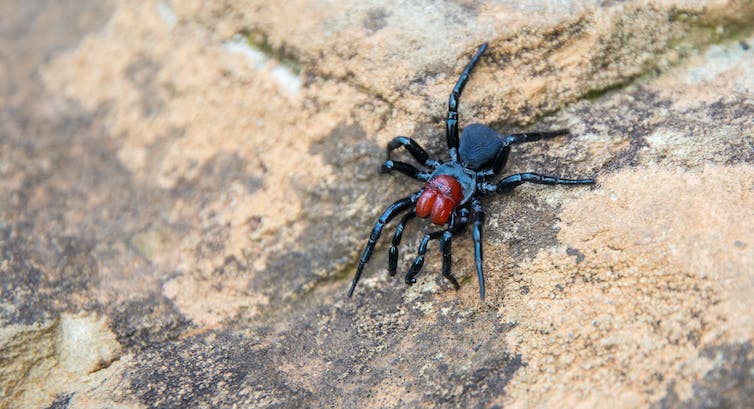 And then there’s the renowned Australian redback spider (Latrodectus hasselti), with its striking red stripe. These spiders are found across the continent.

Redback spiders are related to American black widows and have toxins called latrotoxins, which also disrupt neuronal signalling in their prey. (It’s the female redbacks you need to keep an eye out for.)

Redbacks have a painful bite and symptoms can persist for several days. Fortunately for both redbacks and funnel-webs, effective antivenom treatments are available. If bitten, it’s always best to seek medical attention.

It’s worth noting no one has died directly from a spider bite in Australia in more than 40 years since the introduction of antivenom. So while Australian spiders may have a fearsome reputation, it’s somewhat overblown. 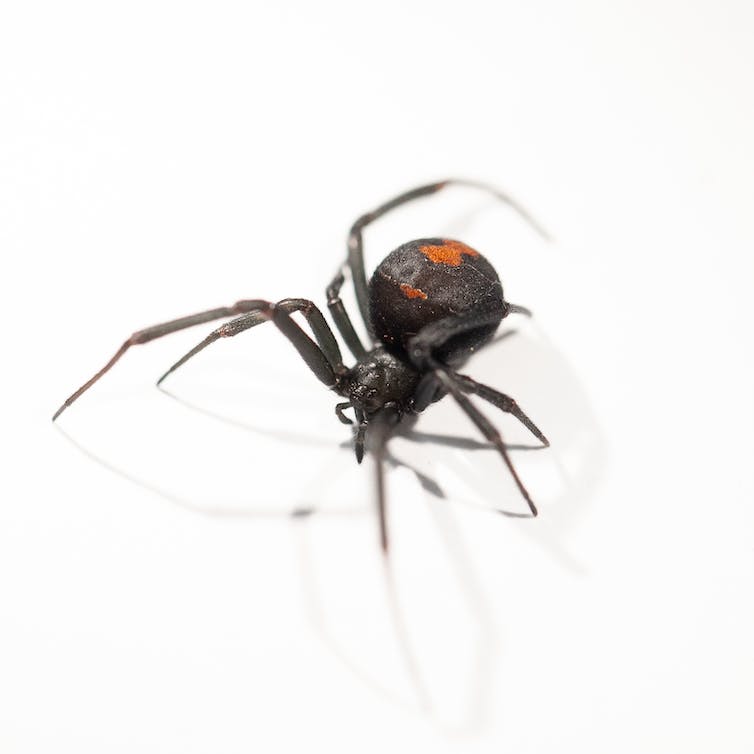 What to do with spiders in your house and garden

The first thing you should ask yourself is, do I need to get rid of them at all?

Spiders play an important role in the control of pests such as cockroaches and mosquitoes, so much so that each year, spiders eat more insect biomass than the weight of the entire human population. 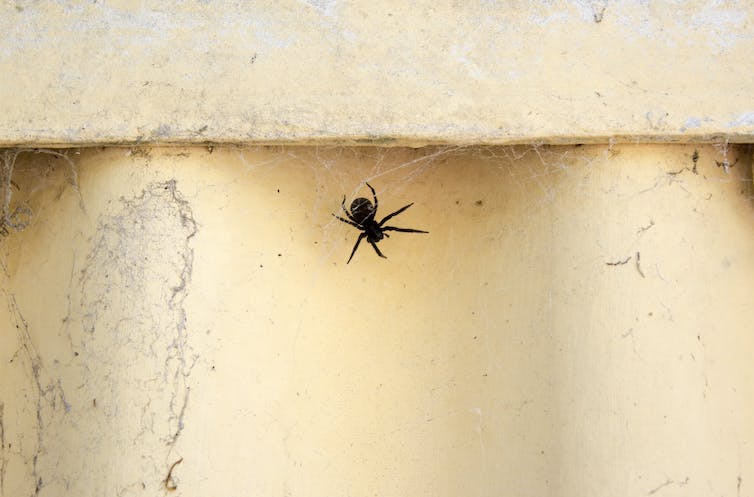 If you come face to face with an unwanted spider in your house, we recommend using a container and piece of paper for a simple catch-and-release into the garden. If the webs are what bothers you — and we’ve all walked face-first through a web at some point — sweeping them away will usually be enough for the spider to move on.

Alternatively, you can leave the webs in the garden to catch other insects (think of them as functional, miniature artworks).

Redbacks have a habit of building their webs under, for example, the rims of pot plants and in outdoor furniture. This can be a problem, especially for small children.

Read more: Don't like spiders? Here are 10 reasons to change your mind

So keeping your house and garden tidy, regularly sweeping and avoiding leaving junk lying around makes your garden less attractive for web-building.

It’s also good to avoid leaving shoes outside (or shaking them out) and checking your swimming pools for lost wandering spiders. This will help prevent accidental contact with funnel-webs during spring and summer.

If you really have to kill a redback, a quick squish with the shoe is far better than using pesticides, which have negative impacts on human health and the environment. This includes polluting streams, harming birds and bees, and leading to insecticide resistance in pests such as cockroaches and mosquitoes.

Spiders are a key part of Australia’s native ecosystems, including in cities. The harm we do to our own health and the environment by using excessive pesticides far outweighs the risk spiders pose to us.

If we can learn to live alongside these not-so-creepy crawlies, our houses and gardens will be better for it.

Read more: Spider home invasion season: why the media may be to blame for your arachnophobia