Every time a weather extreme occurs, some people quickly jump in to say we’ve been through it all before: that worse events have happened in the past, or it’s just part of natural climate variability.

The recent bushfire crisis is a case in point. Writing in The Australian recently, columnist Gerard Henderson said:

In Victoria, there were further huge fires in 1983 and 2009. But until now, there was no suggestion that the state’s future would be one of continuing apocalypse.

Of course, Australia has a long history of bushfires. But several factors make eastern Australia’s recent crisis different to infamous bushfires in the past.

First is the enormous geographic spread of this season’s fires, and second, the absence of El Niño conditions typically associated with previous severe fires.

Thirdly and most important, these fires were preceded by the hottest and driest conditions in Australian history.

As Australia’s climate has warmed since the 1970s, fire weather conditions have become more extreme, and the length of the fire season has increased across large parts of the nation.

Human-induced warming has been evident in Australian temperatures since 1950. This has contributed to a clear long-term trend toward more dangerous fire weather conditions in many areas.

As the planet continues to warm, natural climate variability in the Pacific, Indian and Southern oceans will continue to drive variations in Australian climate.

These natural climate drivers are complex. But taking the time to understand them, and how they interact with human climate influences, is critically important.

Natural climate variability refers to processes such as El Niño and its opposite, La Niña in the Pacific Ocean. Together these are known as the El Niño-Southern Oscillation, or ENSO. Other such processes include phases of the Indian Ocean Dipole (IOD) in the Indian Ocean and fluctuations in the Southern Annular Mode(SAM) across the Southern Ocean. 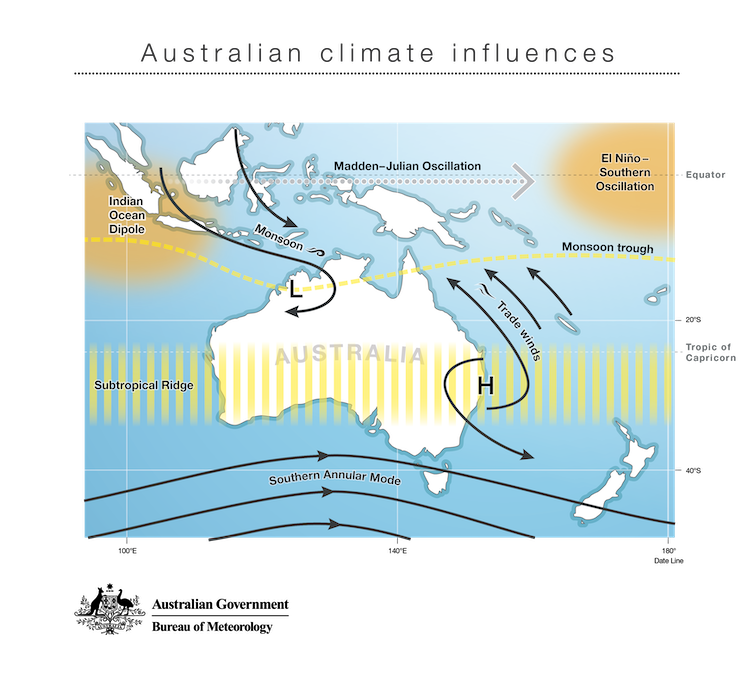 Right now, ENSO is not active, and a very strong positive IOD event – the strongest since 1997 – has just ended. Positive IOD events typically result in below average winter-spring rainfall over southern and central Australia, and are often associated with more severe bushfire conditions.

There has also been a marked warming of the atmosphere over Antarctica, known as sudden stratospheric warming. This has led to a weakening of the polar vortex, resulting in more negative conditions in the Southern Annular Mode – essentially the north-south movement of the westerly wind belt that loops around Antarctica.

New Australian research has found weakening and warming of the stratospheric polar vortex over Antarctica significantly increases the chances of hot and dry extremes, including more severe fire weather conditions across subtropical eastern Australia than is normal for spring-early summer.

Read more: The air above Antarctica is suddenly getting warmer – here's what it means for Australia

This combination of unusual natural variability in the Indian and Southern Oceans, the unprecedented lack of winter rains in 2017, 2018 and 2019, and Australia’s hottest summer on record, have contributed to the extreme drought currently affecting 100% of New South Wales and 67.4% of Queensland.

These factors have combined to bake the landscape dry, even transforming usually wet sub-tropical rainforests into available fuel for this season’s catastrophic bushfire conditions. 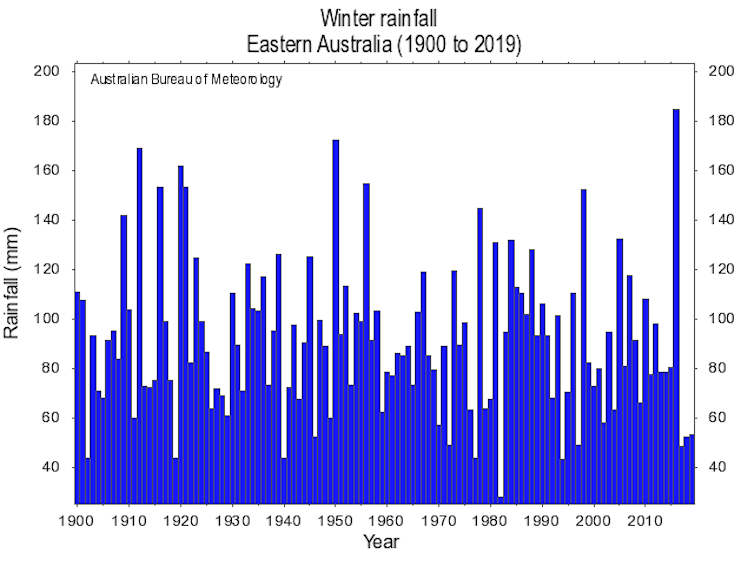 How climate influenced past Australian bushfires

Historically, the most severe Australian bushfire seasons and droughts occurred when the Indian Ocean Dipole combined with El Niño to reinforce dry conditions. Both these climate drivers influence Australian rainfall and soil moisture, with the driest conditions over the southeast, but more broadly across most of the country (with the notable exception of coastal NSW).

As Australia’s climate continues to warm, a range of scientific sources suggest some established relationships between the historical drivers of Australian climate and their impact on rainfall and temperature may be breaking down.

Read more: 'This crisis has been unfolding for years': 4 photos of Australia from space, before and after the bushfires

For example, Australia’s hottest years on record were historically associated with El Niño events, in line with global temperature trends. However, global warming means even traditionally cooler La Niña years are now warmer than many El Niño years of the past. This suggests natural variability may be increasingly swamped by human influences on the climate.

Following Australia’s hottest summer on record, and a record-breaking year of heat and drought, the 2019-2020 bushfire season started as early as winter 2019. 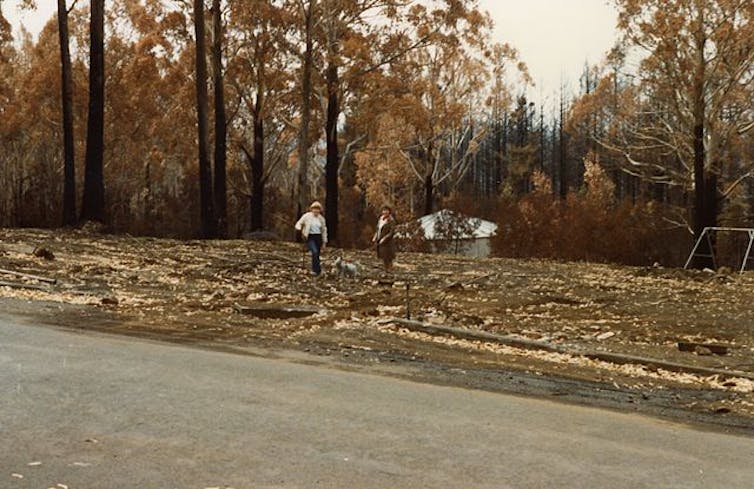 Mount Macedon in Victoria, after the Ash Wednesday bushfires in 1983. Wikimedia

In September, barely a week into spring, catastrophic bushfires wrought havoc in many areas of southern Queensland and northern NSW.

Even the usually moss-covered rainforests of the World Heritage-listed Gondwana Rainforests of Australia burned.

Similarly in Tasmania, the 2016 fires destroyed large areas of ancient Gondwanan forest, triggering a cascade of changes through the entire ecosystem.

Strikingly, the current catastrophic bushfires are occurring in the absence of El Niño conditions typically associated with severe bushfires in the past.

The notorious Ash Wednesday fires that devastated parts of south-eastern Australia in February 1983 occurred during one of the most intense El Niño events on record. Some 75 people were killed across the country’s south-east, and more than 2,000 homes were lost.

Ash Wednesday was also preceded by a positive Indian Ocean Dipole event. Together with the El Niño, this created a “double whammy” of drought conditions which provided the climatic backdrop for the fires. 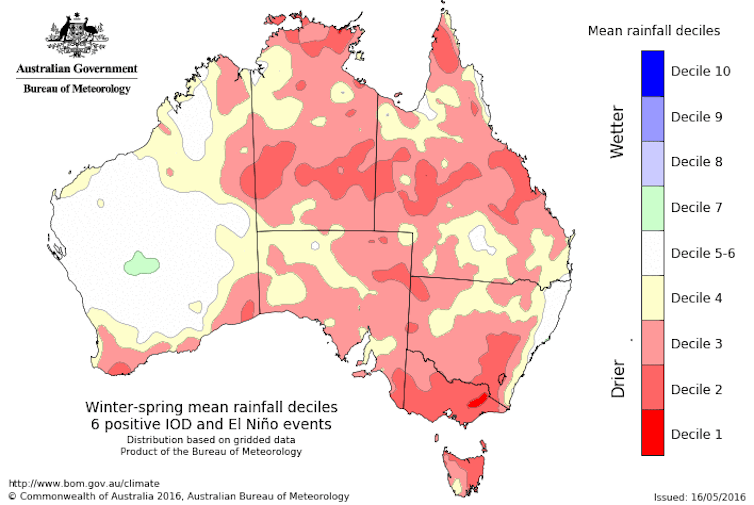 Average rainfall deciles for total winter-spring rainfall for six positive IOD events that have occurred with El Niño event since 1960. Bureau of Meteorology

Similarly, the 1994 Sydney fires were also influenced by a combination of El Niño and positive IOD conditions.

However the current drought is affecting areas such as coastal NSW which have not historically been influenced by positive IOD and El Niño events. This suggests other drivers are at play.

Rainfall deficits experienced from 1 July 2018 until 31 December 2019. Bureau of Meteorology

Perhaps most alarmingly, this summer’s bushfire crisis also differs from the past in the spread and extent of landscape burned. More so than during Victoria’s Ash Wednesday or Black Saturday, this season’s fires have burned large swathes of the country. In some cases, fires merged to form unprecedented “mega fires”. It is sobering to consider what might happen to the Australian landscape the next time an El Niño hits.

Of course it will take time before researchers can pinpoint the full extent to which climate change influenced the current drought and associated bushfires.

But it is already clear to experts that natural variability and human influences on the climate system are now interacting to generate extremes that may have no parallel in Australian history. 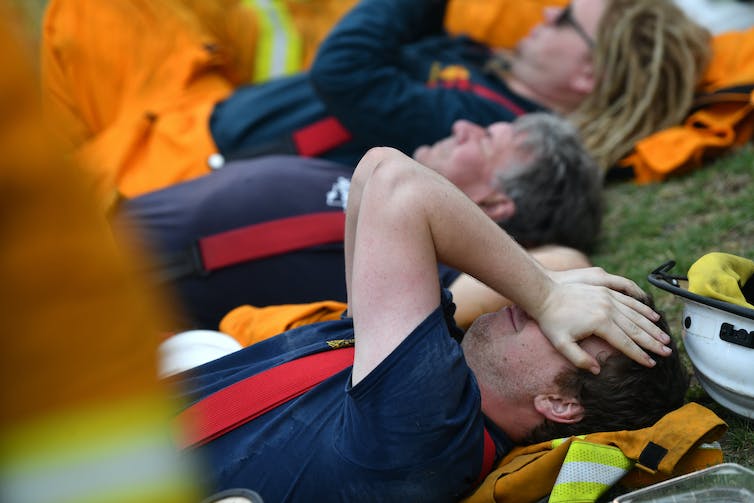 What this means for bushfire danger

As with land and sea temperatures, Australia has seen rising trends in fire danger indices in recent decades.

The bushfire season has become longer and more intense. In fact, the extraordinary conditions experienced during Victoria’s Black Saturday fires in February 2009 later prompted the creation of a new “catastrophic” fire rating, represented by a FFDI of 100 or greater.

On September 6 last year – less than a week out from winter – severe bushfires burned across Queensland and NSW. In most affected areas, daily FFDI values that day (pictured in the bottom right of the graphic below) were higher than anything observed so early in the season since records began in 1950. Astoundingly, a FDDI of 174 was recorded at Murrurundi Gap in the Hunter region of NSW. 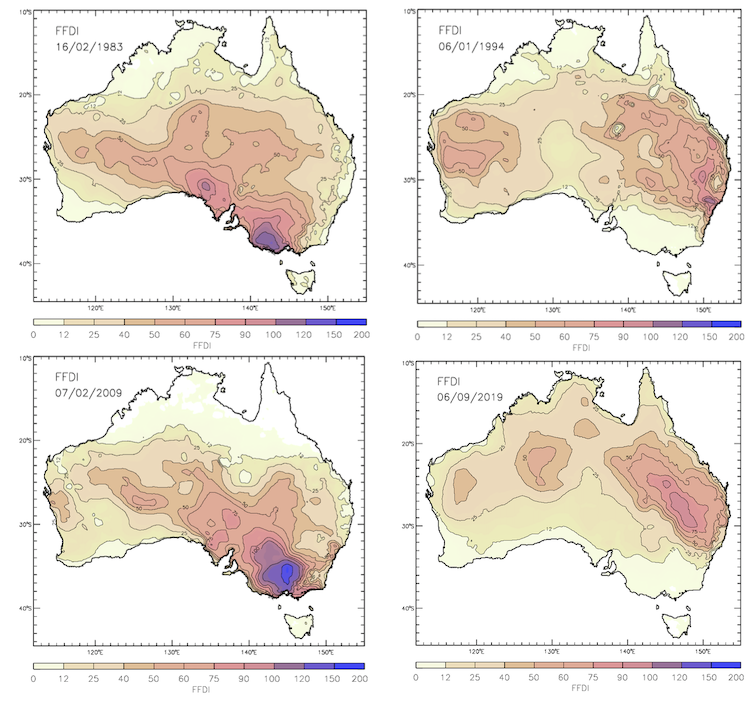 In the past, Australia only had to contend with natural climate variability. Now, our entire weather and climate systems are being altered and amplified by human activity. Climate change is making extreme events even more severe, resulting in unprecedented conditions that are rewriting our nation’s history.

The CSIRO and Bureau of Meteorology’s most recent climate projections reconfirmed their projections released in 2015 which clearly showed Australia faces more dangerous fire weather conditions in the future.

It will take time to understand the exact contribution of each climatic factor in the bushfire season of 2019–2020. However one thing is certain: unless there are global reductions in greenhouse gas emissions, temperatures will continue to rise, increasing the risk that catastrophic bushfire conditions become Australia’s “new normal”.