How we derailed the Earth’s climate in just 160 years

The exploitation of fossil fuels emits CO₂, the main cause of global warming. Zbynek Burival/Unsplash, CC BY

Climate change might be the most urgent issue of our day, both politically and in terms of life on Earth. There is mounting awareness that the global climate is a matter for public action.

For 11,500 years, atmospheric carbon dioxide (CO2) concentrations hovered around 280 ppm (the preindustrial “normal”), with an average surface temperature around 15°C. Since the Industrial Revolution, this level has been rising continuously, reaching 410 ppm in 2018. The geosciences, with their focus on timescales up to billions of years, are uniquely equipped to make extremely clear how abruptly industrial societies have changed and are changing the Earth’s climate.

The main engine of Earth’s climate is the sun. Our star delivers an average surface power of 342 W/m2 per year (roughly that of a hairdryer for each square meter of the planet). Earth absorbs about 70% of this and reflects the rest. If this were the only climate mechanism, the average temperature would be -15°C (below the freezing point of water, 0°C). Life would likely be impossible. Fortunately, some of the absorbed energy is re-emitted as infrared radiation, which, unlike visible light, interacts with the greenhouse gases (GHGs) present in the atmosphere to radiate heat back toward Earth’s surface. This greenhouse effect currently maintains our average temperature around 15°C.

It is thus crucial to understand how atmospheric CO2 is regulated. Over geologic timescales (100,000+ years), volcanic gasses are the primary source of CO2, averaging 0.4 billion of tons of CO2 per year (0.4 GtCO2/y). But CO2 doesn’t just endlessly accumulate in the atmosphere. It fluxes in and out thanks to other environmental processes, and is stored in reservoirs known as carbon sinks. 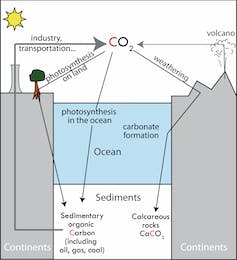 Simplified geological carbon cycle. The sinks (black) show the sedimentation of organic matter and the alteration-synthesis coupling of carbonate. They oppose (grey) sources: volcanoes for more than 4 billion years and thermo-industrial human activities for 150 years.G. Paris

The first geological sink is sedimentary organic matter. Living organisms contain organic carbon built from atmospheric CO2 through photosynthesis, and dead organisms are often sent to the bottom of the ocean, lakes, and swamps. Immense amounts of organic carbon thus accumulate over time in marine and continental sediments, some of which are eventually transformed into fossil fuels (oil, gas and coal).

Calcareous rocks are the second geological carbon sink. Rocks such as granites or basalts are weathered by surface waters, washing calcium and bicarbonate ions away to the ocean. Marine organisms use these to build hard parts made of calcium carbonate. When deposited at the bottom of the ocean, calcium carbonate is eventually sequestered as limestone.

Depending on the estimates, these two sinks combined contain 50,000 to 100,000 timesmore carbon than the present atmosphere.

The Earth’s atmosphere over time

The amount of CO2 in the Earth’s atmosphere has varied widely. Decades of research allow us to draw the main lines of the history beginning after the Earth was fully formed 4.4 billion years ago.

Earth’s early atmosphere was extremely rich in CO2 (up to 10,000 times modern levels), while oxygen (O2) was scarce. During the Archean (3.8 to 2.5 billion years ago), life first flourished, the first continents built up. Weathering started pulling CO2 out of the atmosphere. The development of photosynthesis contributed to decrease atmospheric CO2, while elevating O2 levels during the Great Oxygenation Event, about 2.3 billion years ago. CO2 concentration fell to “only” 20 to 100 times the preindustrial level, never to return to the concentration of Earth’s earliest eons.

Two billion years later, the carbon cycle changed. Toward the late Devonian-early Carboniferous (approximately 350 million years ago), CO2 concentration was around 1,000 ppm. Mammals didn’t exist. Vascular plants able to synthesise lignin appeared during the Devonian and spread. Lignin is a molecule resistant to microbial degradation that allowed massive organic carbon stocks to build up as coal over millions of years. Combined with the weathering of the Hercynian range (the vestiges of which can be found in France’s Massif Central or the Appalachians in the United States), organic carbon burial pulled atmospheric CO2 down to levels similar to (or lower than) today’s and generated a major glacial era between 320 and 280 million years ago. 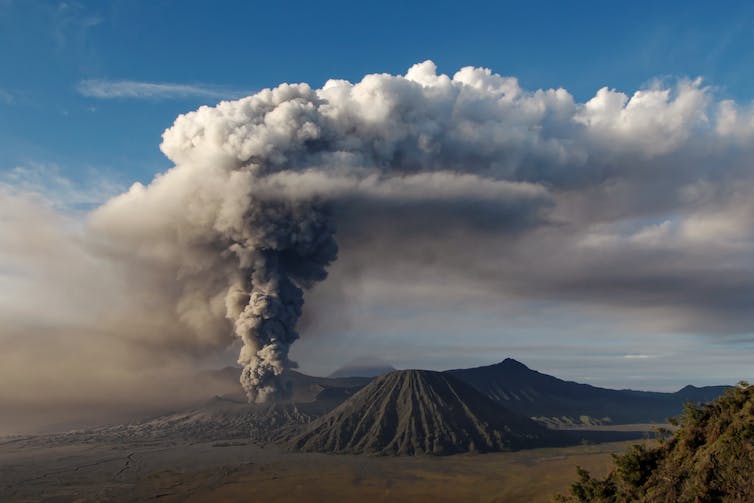 Eruption of Bromo volcano on the island of Java (2011). On a geological time scale, volcanoes play a role in the CO₂ cycle. Marc Szeglat/Unsplash

By the end of the Jurassic (145 million years ago), however, the pendulum had swung. Dinosaurs ruled the Earth, mammals evolved, tectonic activity increased and Pangea (the last super-continent) ripped apart. CO2 increased, to 500 to 2,000 ppm, and remained at high levels, maintaining a warm greenhouse climate for 100 million years.

From 55 million years, Earth cooled as CO2 decreased, notably following the Himalayan uplift and a subsequent increase in weathering and organic carbon sedimentation. Evolution continues with Hominids appearing 7 million years ago. At 2.6 million years, Earth entered a new state characterised by an alternation of glacial and interglacial periods at a regular pace led by Earth’s orbital parameters and amplified by the shorter-term carbon cycle. CO2reached its preindustrial level 11,500 years ago as Earth entered the latest interglacial stage.

A new story: the Industrial Revolution

Until the 19th century, the story of atmospheric carbon and Earth’s climate was a story of geology, biology and evolution. That story changed sharply following the Industrial Revolution, when modern humans (Homo sapiens), who probably appeared 300,000 years ago, began extracting and burning fossil fuels on a massive scale.

By 1950, the addition of CO2 to the atmosphere through fossil-fuel combustion was already proven, via the carbon isotopic signature of CO2 molecules (known as the “Suess” effect). By the late 1970’s, climate scientists observed a rapid drift toward warmer overall temperatures. The IPCC, created in 1988, showed in 2012 that the average temperature had increased by 0.9°C since 1901. That change might seem modest compared to the last deglaciation, when average temperature increased by about 6°C in 7,000 years, but it’s at least 10 times faster.

The average temperature continues to climb, and natural parameters such as solar activity or volcanism can’t explain such a fast warming. The cause is unambiguously human addition of GHGs to the atmosphere, and high-income countries emit the most CO2 per inhabitant.

How will our story end?

Industrial societies burnt about 25% of Earth’s fossil fuels within 160 years and abruptly inverted a natural flux storing carbon away from the atmosphere. This new human-generated flux is instead adding 28 Gt of CO₂ per year, 50 times more than volcanoes. Natural geological sequestration cannot compensate and atmospheric CO2 keeps rising.

The consequences are imminent, numerous and dire: extreme weather events, sea-level rise, glacier retreat, ocean acidification, ecosystem disruptions and extinctions. Earth itself has survived other catastrophes. Although current warming will outpace many species’ ability to adapt, life will continue. It is not the planet that is at stake. Instead, it is the future of human societies and the preservation of current ecosystems.

While the Earth sciences cannot provide solutions to think about the necessary changes in our behaviour and consumption of fossil fuels, they can and must contribute to knowledge and collective awareness of the current global warming.

We thank Morgan Fahey for her invaluable help with the English text.

Should I wear a face mask for bushfire smoke?

How to manage your essential medicines in a bushfire