Are solar panels a middle-class purchase? This survey says yes

The rate of growth in residential rooftop solar photovoltaics (PV) in Australia since 2008 has been nothing short of breathtaking.

Our new research suggests that the households most likely to join in the solar spree are those that are affluent enough to afford the upfront investment, but not so wealthy that they don’t worry about their future power bills.

Australia now has the highest penetration of residential rooftop PV of any country in the world, with the technology having been installed on one in five freestanding or semi-detached homes. In the market-leading states of Queensland and South Australia this ratio is about one in three, and Western Australia is not far behind, with one in four having PV. 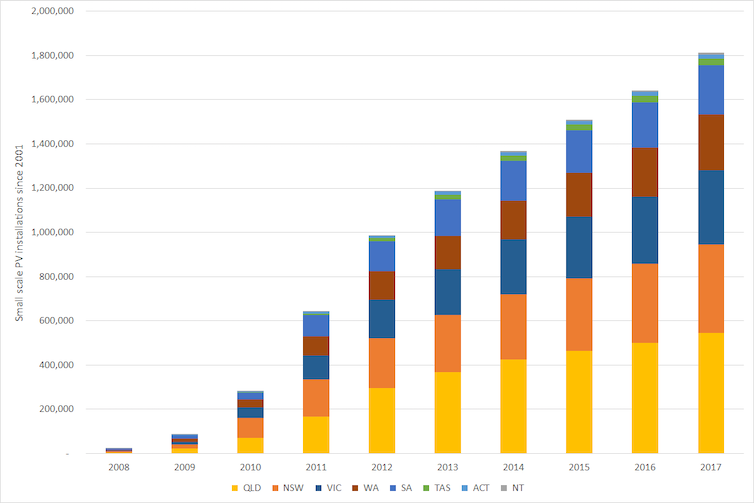 While PV panels give households more control over their electricity bills, and each new installation helps reduce greenhouse gas emissions, the market’s rapid expansion has posed significant challenges for the management of the electricity system as a whole.

Unlike other industries where goods can be warehoused or stockpiled to manage fluctuations in supply and demand, electricity is not yet readily storable. Storage options such as batteries are now commercially available, but haven’t yet reached widespread use. This means that a system operator is required to keep the grid balanced in real time, ideally with just the right amount of capacity and backup to manage shocks in supply or demand.

Securing the right amount of generation capacity for the electricity grid relies on long-term planning, informed by accurate supply and demand forecasts. Too much investment means excessive prices or assets lying idle (or both). Too little means longer, deeper or more frequent blackouts.

But as solar panels spread rapidly through the suburbs, the job of forecasting supply and demand is getting much harder.

This is because the commercial history of residential rooftop PV has been too short, and the pace of change too fast, for a clear uptake trend to be established. Previous attempts to predict the market’s continuing growth have thus entailed a lot of guesswork.

Why do people buy solar panels?

One way to improve our understanding is to talk to consumers directly about their purchasing intentions and decisions. The trick is to find out what prompts householders to take that final step from considering investing in solar panels, to actually buying them.

This was the approach we took with our research, published today in the international journal, Renewable and Sustainable Energy Reviews. We analysed data from a survey of more than 8,000 Queensland households in 2014 and 2015, part of a survey series commissioned by an industry group now known as Energy Queensland. 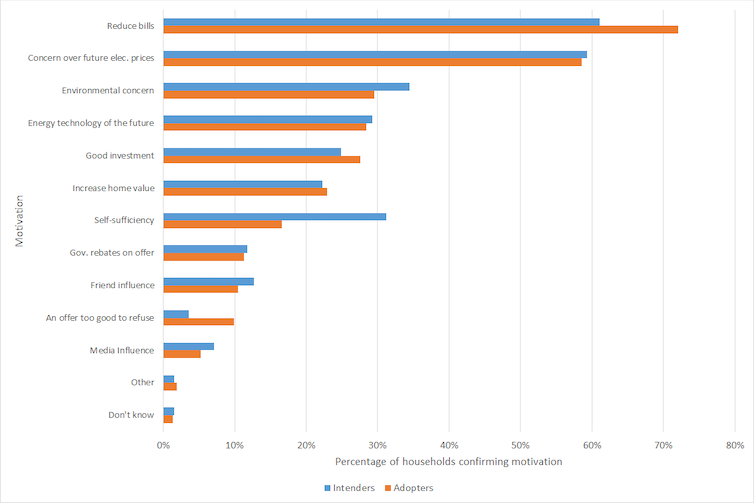 We found that the decision to go solar was driven largely by housholds’ concerns over rising electricity bills and the influence that economic life events have over perceptions of affordability.

But the households that tended to adopt PV were also those that were affluent enough not to be put off by the relatively large upfront cost.

This combination of having access to funds, while at the same time being concerned about future electricity prices, appears to be a broadly middle-class trait.

While the upfront cost of PV can deter lower-income households, this can be overcome by receiving an offer that is too good to refuse, or if concerns about ongoing electricity bills are acute – particularly in the case of retirees.

Electricity price uncertainty is a particular concern for retirees, who typically have a lower income. We found that retirees were more likely than non-retirees to invest in solar panels, all else being equal. Retirees, like many people who invest in solar power, seem to view buying solar panels as being like entering into a long-term contract for electricity supply, in that it provides price certainty over the life of the PV system.

We also found that while the idea of self-sufficiency was important for developing an intention to buy solar panels, this motivation later fell away among households that went ahead and bought them. This could be because householders who buy solar panels, but find themselves still relying significantly on the grid, may conclude that self-sufficiency isn’t achievable after all.

About one-third of those who said they intended to buy solar panels cited environmental concerns as a reason for their interest. Yet this factor did not significantly increase the odds of them going on to adopt the technology. This suggests that when it comes to the crunch, household finances are often the crucial determining factor.

We also found the chances of adopting solar panels were highest for homes with three or four bedrooms. Smaller homes may face practical limitations regarding roof space, whereas homes with five bedrooms or more are likely to be more valuable, suggesting that these householders may sit above a wealth threshold beyond which they are unconcerned about electricity bills.

But perhaps our most important finding is that analysis of household survey data can be useful to forecasters. Knowing who is adopting rooftop PV – and why – should enable better predictions to be made about the technology’s continuing expansion, including the crucial question of when the market might reach its saturation point.

The research paper can be downloaded here for free until August 1, 2018.